Tris Prior lives in a futuristic world in which society is divided into five factions. As each person enters adulthood, he or she must choose a faction and commit to it for life. Tris chooses Dauntless -- those who pursue bravery above all else. However, her initiation leads to the discovery that she is a Divergent and will never be able to fit into just one faction. Warned that she must conceal her status, Tris uncovers a looming war which threatens everyone she loves.On the book the story is told different from the movie.The theme for Divergent is that the choices you make define you. Tris chooses to be Dauntless. The plot is a series of test to her character to prove she has made the right choice. The conflict is that if any one finds out that she is Divergent they will kill her because they threaten the Faction System.

The strange case of origami yoda by Tom Angleberger In this funny, uncannily wise portrait of the dynamics of a sixth-grade class and of the greatness that sometimes comes in unlikely packages, Dwight, a loser, talks to his classmates via an origami finger puppet of Yoda. If that weren’t strange enough, the puppet is uncannily wise and prescient. Origami Yoda predicts the date of a pop quiz, guesses who stole the classroom Shakespeare bust, and saves a classmate from popularity-crushing embarrassment with some well-timed advice. Dwight’s classmate Tommy wonders how Yoda can be so smart when Dwight himself is so clueless. With contributions from his puzzled classmates, Tommy assembles this first case file in the blockbuster bestselling Origami Yoda series.The climax of this book is when Harvey and Dwight have the face off of which origami Yoda is the real wise Jedi! Climax The setting takes place in a school named, McQuarrie Middle School in around 2009.The theme of this story is "it's okay to be original" and "believe in yourself."

What I liked about the book is that everything can happen, like from a loser and weirdo can dance with a girl and be her girlfriend or getting away of immense of trouble and the lastly but not least I liked how the ending was where everybody was happy and Harvey who didn't believe to origami Yoda got humiliated by Dwight which was a loser.Something that I didn't like is that the drawing of the faces where kinda creepy and weird.One question that I have about the book is that it didn't tell how origami Yoda or Dwight could have predict the future.I would recommend this book especially middle schoolers like 6th graders. 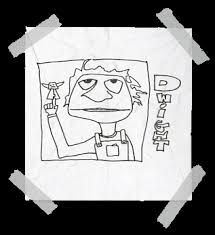 For the first twelve years of his life, Naruto Uzumaki had to live a life without parents and endure the apparent unsolicited hate from the villagers of Konohagakure, never knowing what it was like to be loved or have friends as a result. One day, however, he learns from the covert ninja Mizuki that the Nine-Tailed Demon Fox was sealed within him soon after his birth and is the reason he is alone in the world. After this, Naruto's fortunes begin to change. In addition to finding a father-figure in Iruka Umino after defeating Mizuki, Naruto achieves his dream by finally becoming a ninja, his ultimate desire being to become the greatest in Konoha, the Hokage. In doing so, Naruto is added to Team 7 along with Sasuke Uchiha and Sakura Haruno under the leadership of Kakashi Hatake. To see whether or not the three are ready to become ninja, Kakashi administers a test to see if they have what it takes. Each fails independently, leading Kakashi to believe they will never become ninja.

What I think about this book is that is really funny and interesting because I really like the story conflict and the characters of the story.What I don't like is that why would Minato seal the Nine-Tailed Demon Fox on his son, I mean, I know that he sealed half of the Demon soul on him but at least he could have sealed it to Kushina because she will die, they thought Naruto will be presented as a hero but he it didn't. I don't really have any question about the manga because I already watched the series so I know everything.I would recommend this book and the others volumes too to people that like manga because I really like to read manga too, but I prefer watching the episodes of the series. This book is about two brother,Ed and Al, that got affected by alchemy when they were little. Ed was fighting Elvin and Lust they were one of the most stronger enemys on the series. After that Ed got beat down by them and his robot arm had a serious malnfunction. Ed went to the hospital to recover his few days and he saw his brother Al was acting so strange.Ed called Winry, a friend that invented the robot arm for Ed, to help him because his arm wasn't working. Then Ed asked to his brother Al, what was going on and he said that he was too weak because he couldn't save him and he could have died too because he was busy a guy who he could have beat him in seconds. Ed said it was okay because he said promise to him and he's not gonna die unti he realized his promise to him. While Winry was adjusting Ed's arm, colonel Hughes tryed to find what does Envy and Lust wanted from him. After that Ed had recover, Ed and Al went with Winry to Rush Valley because Winry really wante to go over there when she was little but she couldn't and it was long that Ed and Al had a vacation so she went with her. But after they had leaved colonel Hughes died by Envy and Lust because he had know to much about them.

I really liked the book because like how the story was at the start of the story and the characters because it's making connections and i liked how climax of the book. I don't really liked the last part which is about Scar was chased by enemy and then he got save by some peoples because I don't really understand what happened. Yes, I would recommend the book but first its better to read the first volume because it's a little confusing.